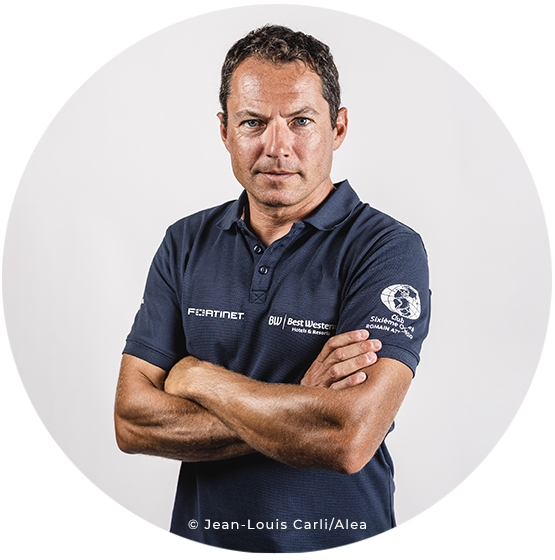 Bitten by the sailing bug from a very early age, there was nothing to suggest that Romain Attanasio would become a sailor.

Originating from the Haute-Savoie region in the Alps of eastern France, Romain was born into a family of top-level skiers, his career all mapped out for him. Romain Attanasio had other plans however.

Accustomed to spending weeks on end beside the sea at his great-uncle’s house for the holidays, Romain was very young when he first got into sailing, aboard a Poker, a small family cruiser dating back to the seventies, exploring the idyllic islands around Brittany from Houat to Hoëdic and Belle-Ile-en-mer, as well as the Gulf of Morbihan.

His passion for sailing was in his blood by then! Keen to take it further, he joined a local sailing dinghy club before managing to integrate a special course for athletically gifted pupils in La Baule on France’s Atlantic coast sailing a Laser. There he hit upon a real talent for round the cans racing. Eager to develop this further, he succeeded in putting together a campaign for the Mini 6.50 programme, otherwise known as ‘offshore racing nursery school’. For his first transatlantic experience, the Mini Transat, in 1999, which is a singlehanded transatlantic race on 6.50 m sailing boats, a massive storm rocked the Bay of Biscay. His boat capsized. Rescued at the last minute by a cargo ship, he was repatriated to Spain and then France: he landed in Orly, Paris, with no change of clothes, no papers and no money…

It’s an anecdote he won’t forget any time soon, but it didn’t put him off continuing in his career as a sailor, quite the contrary in fact.

Equipped with a competitor’s energy and mentality, he appealed to his then business partner who, given his exciting start in the Mini-Transat, gave him the necessary funding to continue his campaign. At that point, Romain joined the Pôle Finistère de Port La Forêt, a local training cluster and the fast track for singlehanded skippers. There he became one of the series’ mainstays and a safe bet, racking up excellent results in La Solitaire du Figaro as well as the Transat AG2R. His career as a skipper was up and running and linked fairly naturally onto the next episode.

Having raced in the Class Figaro for ten years or so and sailed alongside the top names in the multihull world (Michel DESJOYEAUX on both giant and Orma trimarans, Franck CAMMAS on Groupama), Romain felt that the time had come to take part in the Vendée Globe. After participating in the Transat Jacques Vabre in 2015 with Louis Burton, he signed up and on 15 January 2016 he purchased…

After participating in the Transat Jacques Vabre 2015 with Louis Burton,

Romain felt that the time had come to take part in the Vendée Globe and to champion a project of human proportions. He signed up and on 15 January 2016 he purchased Tanguy De Lamotte‘s Initiatives-Cœur, a legendary Vendée Globe boat.

Originally built for Catherine Chabaud, she was an incredible boat! She’s a very old boat today, but my goal is not about my ranking in the Vendée Globe. I want to sail singlehanded around the world. I want to understand why Samantha (Davies – his life partner) came back different from her circumnavigation.

With regards to budget, Romain and his team call upon business partners of all sizes. Two French family businesses step up as title sponsors, the rest of the funding being provided by smaller companies. The sponsors unite around the race and around a project geared towards reducing plastic waste in the oceans.

Watching the skippers sail over the horizon as a child and having assisted and supported his life partner Samantha Davies during her own Vendée Globe campaigns, he too has completed two Vendée Globes, back in 2016 and 2020

Together, they are the first couple in the history of the race to have each participated in the Vendée Globe.

Having both already taken part in the Vendée Globe round the world race, the Davies-Attanasio pairing are set to experience an extraordinary adventure as a couple. Competitors in the 2020 edition, they are now both planning to take on the globe in 2024!